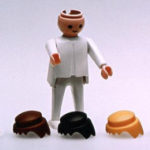 A new head then? Ahhhh, come on, neurologist – be a sport!

Imagine you could order a new head, complete with new brain and all? A replica head of your own choosing. Imagine how stressful that would be!  Which replica head would I plump for?

The head of a supermodel? Yes! No! Wait. Then I’d have to think like a supermodel AND kiss goodbye to all that chocolate. I suspect my supermodel head would feel a trifle ashamed of my less than supermodel body too. A body that I’d still have to parade up and down the catwalk. In my hiking boots.

The head of a famous athlete then? Hm, not sure. My athletic head would be totally dismayed at my lack of physical fitness. My arms and legs might be reasonably toned, but they definitely wouldn’t pass muster for that athlete’s head.

The head of a Nobel Prize winner? Dunno. Then I’d have to devote myself to something incredibly important. On the other hand, it would also mean enjoying centre stage and receiving a coveted prize… wait…I could do that bit myself, with or without a new head!

The head of a neurologist? No thank you! I’d know way too much about my own grey matter. Worse still – I’d have to start acting sensibly (for once). I’m pretty sure that I’d also begin appraising everyone I met according to their neurological health. Dear Mr. Neurologist, there’s no doubt you have an excellent head on your shoulders, but, well, frankly…thanks but not thanks.

Who in their right mind would want to swap heads?
Not me.
Don’t get me wrong… theoretically I wouldn’t say ‘no’ to someone else’s spare parts. But I’m far too attached to my own head – my own unique way of thinking, my own memory, my own decisions, my own everything – to ever go for an entirely new head. Apparently, I still love my own loaf (and the vivid imagination that goes with it) far too much. That’s why people make such a big deal of Parkinson’s. I know I do. It threatens your head and all that goes on in it.

So, now that I come to think of it, considering the pro’s and cons and what have you – I’ve decided that I’m going to keep my (own) head. I’ve grown quite attached to it and to all that goes on in it. I am not going to part with my scatterhead, will not swap, barter, lease or go for a fancy replica – no nothing no nada.

I am definitely going to keep my (own) head.

The worst parkinson’s prejudices are mine.