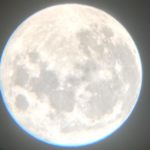 I’ve seen bigger moons, declared my friend on our girlies’ night out in London. The distance between the earth and the moon was tiny that night. And it was a full moon, so it looked massive. My husband called from the Netherlands, to insist that we pop outside and take a peek. A once in a lifetime event, he said. He was right: it was colossal! Quite intimidating. Spooky, in fact. My friend was less impressed. She glanced at it nonchalantly, and declared: I’ve Seen Bigger Moons Than THAT!

The perfect proclamation after several gin and tonics, a tikka masala and some chocolate for dessert. What a teeny weeny, pathetic little excuse for a moon. It’s almost invisible. Do you see a moon? Come on girls, let’s go back inside, I fancy one last gin and tonic. But that moon WAS big, bigger than ever before, closer than ever before. Just like Parkinson’s. On a good day, Parkinson’s feels farther away, on a bad day, it’s bigger and closer to home. Fortunately, I have many more good days than bad.

Take a mental a leap with me, if you will: a few months after diagnosis, a friend and vicar asked me: where is God now, now that you’ve got Parkinson’s? My instant reply was: we both know who’s bigger.

A mere whiff of Parkinson’s

My neurologist keeps on telling me: you’ve got a mere whiff of Parkinson’s, and only a nip of medication to go with it. True. But I still carry the full weight of a future with Parkinson’s. And each day, I’m forced to choose who’ll come out on top – my family, or Parkinson’s. You have to choose who to make bigger. Another friend, who has a serious disease that leaves her physically restricted, said: I actively choose for happiness on a daily basis. And, it’s true. She does everything and more. She’s such an inspiration. Her ‘moon’ might be gigantic, but her determination to remain happy is much greater.

Not convinced you’ll come out on top? Believe me, I understand. I don’t always manage it myself. That’s why I invented a nice little exercise. It’s quite simple. No need to do anything actually. No paying attention to your breathing, no stretching, no mindfulness exercises. Nothing. Simply open your door or window, defiantly face the moon and shout out loud and clear (hard enough, in fact, for the neighbours to hear):

What’s that puny little pancake doing up there?

I’ve Seen Bigger Moons Than THAT!

Remember, no matter who or what your moon is, you’ve always seen bigger.