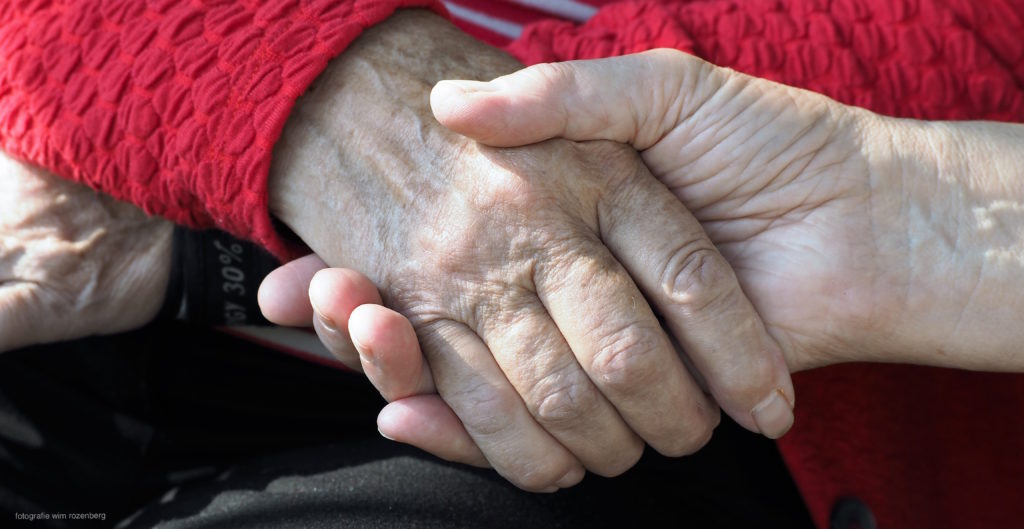 When something major happens, you tend to want to share it with someone. You’re feeling shocked or happy or sad, and that can be too much for one heart.

Nine years ago, my grandmother died. We told the children. Our son of almost 7 was so startled that he started to tremble. A little later, he said, “the worst is when they tell you”. He was right. The instant that you hear something, something major, it goes straight through your own heart. It’s only after that very first instant that you begin to experience it together.

I understood exactly where our son was coming from. Because oma was almost 102. I’d had the privilege of a wise oma, in full possession of all her faculties, until I was 42 years of age. Her own husband, my opa, only made it to 36. There was the war, the resistance…I needn’t say more. During her final years, she began to talk about “the past”. About the proposals she’d received after the war. But there was only one man for her, and she’d lost him. ‘It took two’ to help lead the Dutch resistance during the war. So, how could she possibly continue alone? Now that the war was finally over and her child had died a few years after the war?

I’ve no idea. She was likely strong and brave. But she had to get through the remainder of her life, another 73 years, on those ten, twelve years ‘together’. It took two to survive, even though one of that ‘two’ was no longer alive. She always remained so upbeat. How on earth did she do that? How did she make her decisions? How did she sleep alone in bed at night? To this day, I’ve no idea.

It takes one to have parkinson’s

Back to the present. It takes one to have Parkinson’s, it takes two to deal with it. Yet, it’s me who takes my medication, not the entire family. So one part of it, I do bear alone. Only I know what it’s like to fumble with the groceries, only I know what it’s like to shuffle when I walk. And then it hits me, just as it hit grandmother. Those groceries and that shuffling go straight through my own heart. I have to cope with them by myself. I can’t just hand my Parkinson’s over to someone else. I can’t just say: ‘I tell you what, if you take my Parkinson’ today, I’ll come and pick it up again tomorrow morning. Promise’. A sort of Parkinson’s hotel. It’s simply not possible. I have to do it alone, einzel, toute seule.

It takes one to have Parkinson’s, it takes two to prevail. You don’t necessarily know who’s going to form the other part of that ‘two’some in advance. Sometimes it’s your pal around the corner, sometimes it’s your son or daughter. Sometimes it’s your husband, sometimes it’s that friend you had lunch with the other day. Or the friend who placed a comforting hand on your shoulder. And, although that friend’s own foot doesn’t shuffle, although that friend’s own fingers don’t fumble with their keys…that friend still feels what you’re feeling. That friend still knows when your heart is quietly breaking or, conversely, jumping for joy. Yet, that friend couldn’t possibly know all this if you hadn’t already told him. If you hadn’t laid yourself bare. And that requires a significant swallowing of pride. Because it’s not nice being forced to explain that your motor skills are not what they once were, it’s not nice having to reveal that you can no longer write your own name due to Parkinson’s. But hey, maybe you’ve got
Parkinson’s or cancer or your husband is no longer around, your friend undoubtedly has cracks of their own. Cracks as wrinkles in two hands. Two hands of friendship, clasping each other tightly on the bench under the chestnut tree. Reaping the fruit of their friendship. 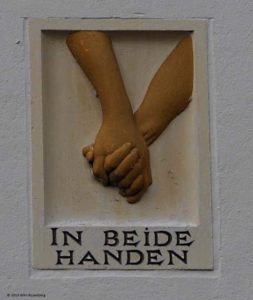 It takes two to face the cracks, two to glue them together. So that you can continue with a little bit of renewed faith. Because you really don’t have to do it all alone, einzel, toute seule.

Doctor vs Patient. 7 differences and 2 similarities